This is the world of Dragon Evo as revelead in the current version of the game(Twisted Kingdom). The current known terrain is the Land Erendor, the southern parts of the continent of Tyrenir. 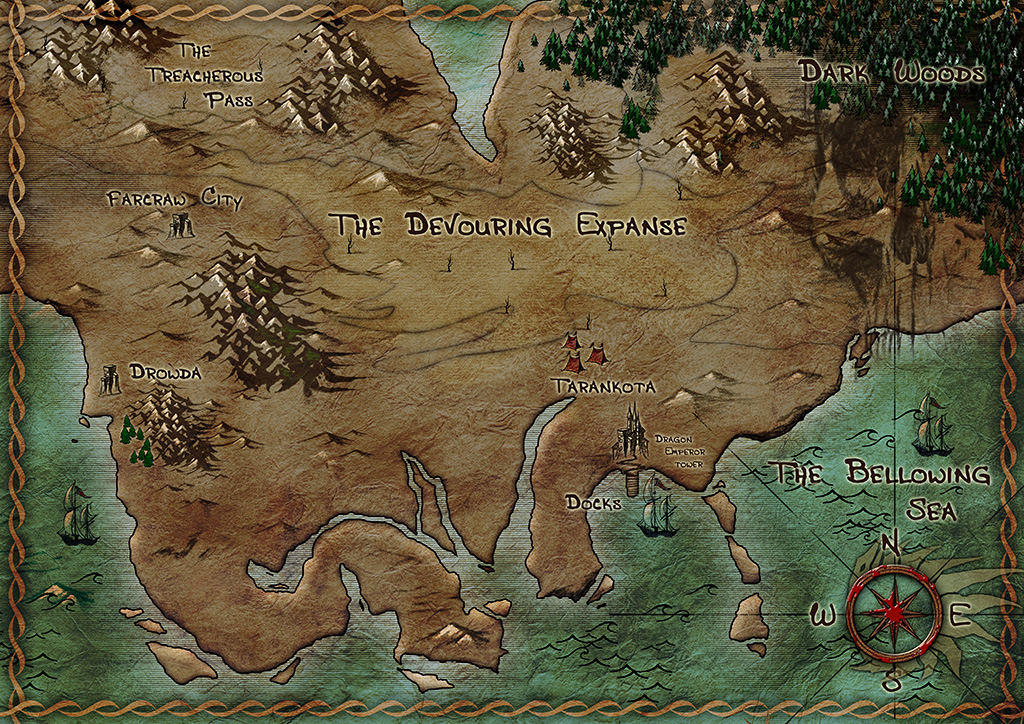 A barren, dangerous land that stretches all the way East from the mountain ridge protecting Farcraw City to the mountains by the Dark Woods. Rock and sand and burnt out carcasses of trees, this is no-man’s land which only the very brave and the very foolish dare enter.

It was here that on the twenty first day of spring the Highwind Empire and the Rutai had their decisive battle that resulted with the Highwind’s airfleet being decimated by a dragon onslaught, planting the seeds for the the Rutai Emperor’s merciless DragonEvo Project. It was here that countless men and women went missing without a trace as they travelled through Erendor, and it was here, in the South point of the Expanse, that the Dragon Emperor had usurped the once free city of Tarankota.

There are rumours that somewhere under the sands there lives an ancient, ageless monster: a worm so big it could swallow entire villages whole. Everyone who set out to confirm the rumor disappeared never to be seen again.

The Treacherous Pass is a plateau set deep between two mountain ridges North of Farcraw City. Once a green valley, it has become a desolate place ever since alchemists and dragons conspired to open a portal to the dragon’s homeworld, choosing the Pass as the location for their tinkering with nature.

The land, scorched by dragon fire, still bears the scars of the powerful adapotirte blast that swept through the land when the portal violently closed. The ground itself here reflects the alchemist’s unholy work: dark, crooked cracks run across the surface like webs of a shadow spider, promising to forever devour adventurers who do not look where they’re going.

With the opening of the portal, this place marked the beginning of modern history as we know it. There are many scribes among the Monks of Eryndil who believe that this is where history will end as well.

The Maughman & Co. Shipment Company that owns and operates most of the boats in Erendor make a point of never straying too far from the shore when sailing on the Eastern side of the continent. The captains who go against the company policy are rarely heard from again, but there was one ship that sailed far enough into the Bellowing Sea to return with strange tales to tell. It was a privateer vessel, escaping a Rutai Imperial frigate, which made it quite far before turning back. The frigate gave up the pursuit, but it was hardly a victory for the pirates. When they returned, they were manned by only half the crew they set out with.

Later, warmed up by cheap grog, the sailors told of waves that hurled their ship through the waters as if the sea had a mind of its own, of strange, four-legged creatures covered in scales with razor-sharp teeth that that scurried on deck and pulled sailors into the depths, and swore they saw a giant beast with leathery wings rise from the the water and break one of theirs masts as it made towards the skies. Rumors of monsters and of a fearsome water dragon spread from tavern to tavern as fast as a horse could carry a man, and so to this very day sailors make sure to stay clear of the Bellowing Sea.

An ancient city at the south point of the Devouring Expanse separates the lifeless dunes and the raging waves of the Bellowing Sea. The city is actually many cities built upon one another throughout the centuries.

There is the undercity, a series of interconnected buildings and corridors deep below sea level. It is host to pirates, rogues, and profiteers, who come to Tarankota by desert or sea. The only law in the undercity is that there is no law, and anyone venturing into its depths must know how to navigate the cutthroat world of criminal scum unless they’re planning on losing their wallets right before losing their lives.

Above the city is the overcity, tall intricate spires reaching towards the skies. This is where the elite lives, those who, until recently, controlled who lives and who dies in Tarankota.

Most commoners live in the layers of mismatched housing blocks in-between.

But the so-called elite no longer have any say in the city’s governance. That power has fallen to the Dragon Emperor, who usurped the city that he now calls his own. Anyone who dared oppose the great dragon perished in flames; the rest, the survivors, quickly learnt that it’s better to be ruled by a dragon than to be eaten by one.

The Dragon Emperor himself lives in an enormous castle remarkable for its Gothic architecture and design. The castle stands on an artificial island inside a man-made lake. Some say that the castle is as deep as it is tall, reaching to the very bottom of the undercity, with many unexplored caverns leading toward it around the island’s perimeter. Intricate gargoyle figures on the castle’s roof oversee Tarankota’s central district, reminding its inhabits that the Dragon Emperor forever holds their fates in his razor-sharp claws.